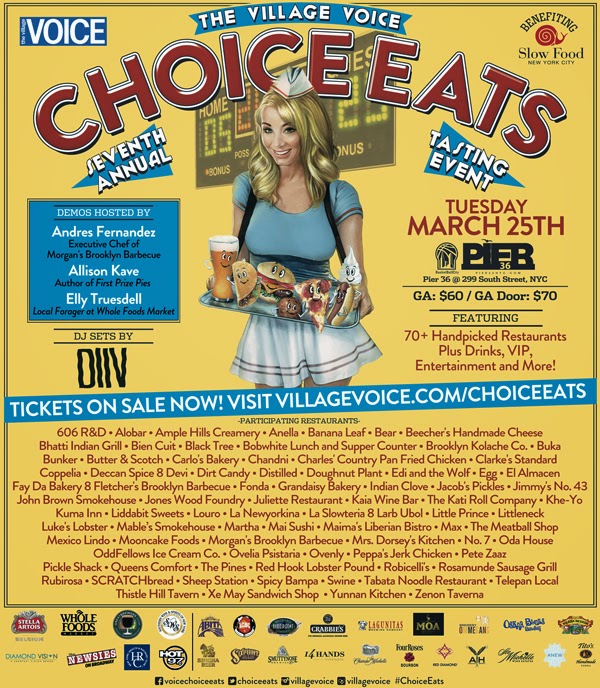 The Village Voice is also excited to confirm its first two food demos as part of this year's event. Andres Fernandez, Executive Chef of Morgan's Brooklyn Barbecue, the new buzzy BBQ joint with Texas roots already featured by The New York Times, New York Magazine's GrubStreet, and of course, the Village Voice's own Fork in the Road food blog will present a BBQ demo to all attendees. The second demo will be hosted by Allison Kave, Brooklyn-based author of First Prize Pies, a new cookbook featuring 85 recipes that will have you racing to the kitchen to whip up your own homemade pies.

In addition to 83 eats to sample and demo, guests will also get to sip the night away thanks to the "Stella Artois Beer Garden," 10 wines, vodkas, and bourbons from Southern Wines & Spirits and Blueprint Brands and 12 craft beers from Great Brewers. Guests will be given souvenir Choice Eats tasting glasses, provided by Diamond Vision.

All ticketholders will have access to this year's newest additions including the first ever Choice Eats Social Media Lounge, "Hashtag Hangout," provided by Whole Foods Market, plus they will be greeted in style with a Red Carpet Welcome, provided by the New York Health and Racquet Club.

A limited number of General Admission tickets are still available. Purchase tickets early and save $10 off the door price of $70 at www.villagevoice.com/choiceeats.
Posted by Kim Weling at 8:35 PM