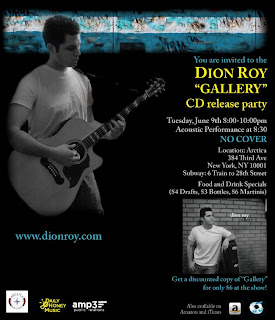 Indie singer/songwriter Dion Roy celebrated the release of his CD “Gallery”, with an acoustic performance at Arctica Bar on June 9th.

Dion’s ten-track album includes songs with themes such as addictive love (“Come Back Around”), failed relationships (“Wants It”), betrayal from a loved one’s substance abuse (“Orchid) and useless carnage of war (“Blind World”). Dion shares the sounds of Peter Yorn, Ryan Adams, Keane and Snow Patrol, with his blend of pop, rock and folk. You can feel the thought and emotion behind Dion’s music, as the lyrics are easy to relate to. As an encore, Dion performed a cover of “Bittersweet Symphony”.

Dion was born in Namibia, raised in South Africa and New Jersey and is now a New Yorker at heart.

Dion will be playing at Arctica Bar on Wednesday June 24th, and then will be touring in West Hollywood, San Francisco and Seattle. Check out dionroy.com for exact tour dates and locations and to view live performances.
Here's Dion Roy performing "Come Back Around"