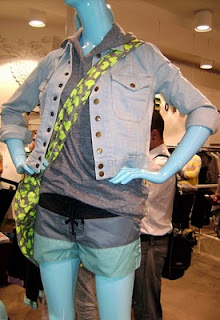 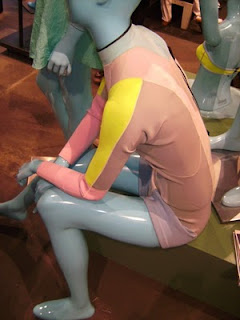 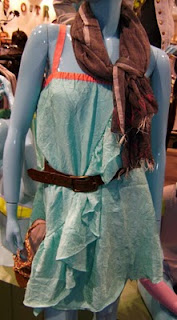 American designer Cynthia Rowley hosted a party on April 1st at the Soho Barney's Co-Op to mark the launch of her latest collaboration with Roxy, a deal set to endure over the next 3 years.

The surf-inspired line has surf chicks covered whether they are hitting the waves or the boardwalk bar. Wetsuits, swimsuits, dresses and board shorts in green neons and pastels (Rowley said she was inspired by the colors on one of her Meyerhoff surfboards), topped off with great sandals and accessories, including an awesome gold shark tooth pendant.
Price ranges from $13 to $225.

Fittingly, Rowley had pro surfers Kassia Meador and Lisa Anderson (four-time world champ) model some of the looks. Anderson was decked out in a neoprene dress, while Meador rocked a bandeau top and leggings, paired with her own blazer.

They both also had on Rowley for Roxy footwear. 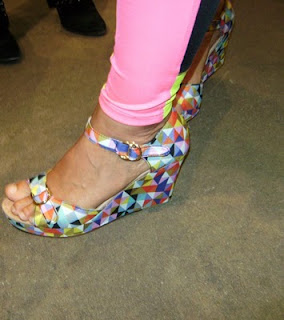 She's TINY. I was shocked to hear her say that she grew up surfing in Montauk.
Finally, my favorite pic (and outfits) of the night. 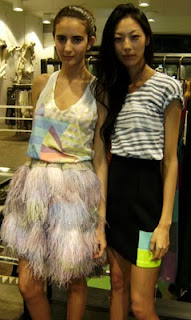 Images courtesy of Beauty by Benz

The line hits stores this month - you can find it at Barneys, Colette, and Cynthia Rowley and Roxy stores. You can shop at Cynthia Rowley for Roxy at roxy.com.
- Stephanie Wu
Posted by Kim Weling at 4:06 PM

Email ThisBlogThis!Share to TwitterShare to FacebookShare to Pinterest
Labels: Cynthia Rowley for Roxy