On Friday, February 12th, Christian Siriano debuted his Fall 2010 line in the Promenade tent at Bryant Park. The winner of the fourth season of Project Runway, Siriano has shown 4 collections to date. The aesthetic of his previous collections is undeniably chic, the clothes well-tailored for a strong, sophisticated woman. Siriano enjoys mixing materials and textures, and infusing pop colors into an otherwise muted palette.

The messages of his Fall 2010 line were no different; models strolled the runway in structured suits with defined shoulders and nipped in waists. The most notable one featured a beautifully pebbled leather jacket paired with a wool skirt. 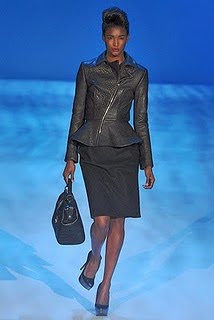 The first few looks of his collection were dedicated to outerwear; in truth, I wasn't crazy about them. The chevron coats and jackets, though well cut and flattering, would have been better in just about any other print.... 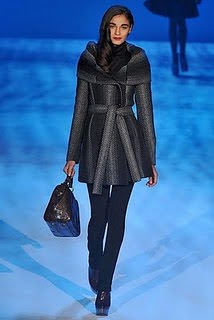 I did, however, love the sheath dresses he did, including this metallic tweed one. 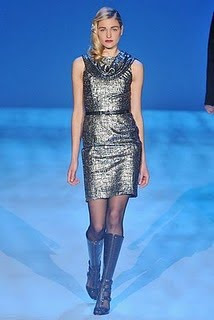 Metallics were a reoccuring theme in the show, done in a range of materials including tweed, brocade, and silk chiffon, and incorporated into dark, mostly black outfits to add hint of gleam. While the first few handfuls of looks were done in black and gray, the second half of the show gave way to gorgeous, satin and silk chiffon gowns in deep hues - slate, fuschia, royal blue and wine. I particularly loved this royal blue one shouldered dress: 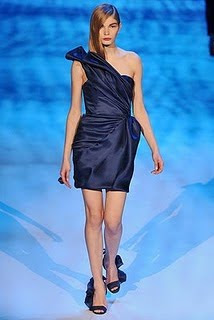 The crowd went nuts for this final number: 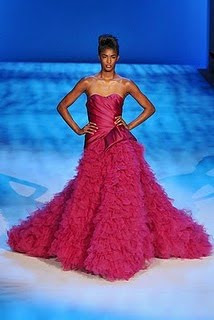 Each of the 36 looks in his line demonstrated Siriano's craftsmanship; however, the collection lacked coherence. The first half of the show might as well have been a separate entity from the second half; it just didn't seem to mesh. Outerwear in masculine chevron in dreary grays, and then ruffled, hot pink gowns? Siriano failed to communicate a single, unified message. Though he's certainly got talent, it is clear he is still a neophyte with room to improve in his future collections. Not too shabby for a 24 year old though..
- Stephanie Wu, Contributing Writer
Video courtesy of mbfashionweek.com